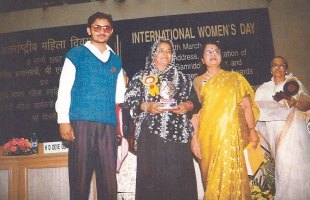 The founder of MMBA, Mrs Mumtaz Ben, is a resident of Indira Colony. In the beginning of the 1980s, Indira Colony on the outskirts of Barmer presented a picture of despair – without roads, potable water, healthcare facilities, education and basic infrastructure. In those days, despite belonging to an orthodox Muslim family, she dreamt of doing something different to change her colony and set an example for egalitarian society. She worked very hard to come up those barriers and convince her family members.

She began with motivating her fellow residents and explained them their rights to basic needs. In a male dominating society she found it difficult to materialise her thoughts. However, because of sincere and concerted efforts, she organised her fellow residents that turned into a movement raising the demand for their basic needs to the district administration. Her selfless and emancipated approach and getting things done by being one among the people changed the face of this colony. Today Indira Colony residents are proud to say that they have primary school, drinking water, basic health care facilities and proper infrastructure.

The success story of Indira Colony laid foundation for MMBA. The then District Collector of Barmer, Mr Sohan Lal, acclaimed the efforts of Mrs Mumtaj Ben and with his guidance, the movement got its shape formally by registering as an NGO under the Rajasthan State Society Registration Act, 1958, on January 25, 1991, in the name of Mahila Mandal Barmer Agor (MMBA). Since then, the organization is constantly striving for the upliftment of deprived, dalits and empowering women and girl children through basic health care services, education, social and economic intervention.

Because of her selfless and concerted efforts towards the upliftment of women, the National Women Commission has graced Mrs Mumtaz Ben with Women Excellency Award (view certificate) in 1997. The organisation has been also accorded at district and state level many times.