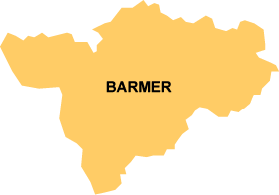 Barmer is the second largest district of Rajasthan with a land area of 28,387 sq km. It is located at the western frontier bordering with Pakistan in the south-west, and surrounded by Jaisalmer district in the north-west, Jodhpur in the east, and Jalore district in the south-east and Gujarat state at its south. The district is a characteristic of beautiful culture, tradition and colourful lifestyle and festivals with smile on people's face fighting the arid conditions of the Great Indian Thar desert.

Despite scanty rain and dry climatic conditions, people are predominantly dependent on agriculture and animal husbandry with the children helping the family in farming and cattle rearing. Thus many children do not join school or drop out early. Frequent droughts and famine have become a part of life of the people. When there is a crop failure, the farmers are forced to take loan from the money lenders at high interest hoping to pay back the debts at the next harvest but if another drought follows, they again seek help from the money lenders and are again debts driven deep in to poverty. The cycle continues, never letting the poor farmers out of poverty. At times of unemployment the whole family migrates to other places including other states like Gujarat in search of job.

The major crops cultivated are millets known by the name bajra, gowar, mun and moth. Of the total land area, 201,954 hectare is not available for cultivation, 28,523 hectares of land is under forest and 203,560 hectares of land are permanent pastures and other grazing land. It has a history of seven consecutive droughts and the latest year is affected by failure of monsoon.

Many of them live in sparsely populated distantly located hamlets called dhani among the sand dunes, where there are no basic facilities like roads, transportation or communication facilities, health, potable water supply, electricity etc. The difficult geographical terrain entails very high cost of providing basic services.

Yet another major hazard in the way of village development is the social evils and cultural practices. Forced marriage, female infanticide, child marriage and atrocities against women are a part of the prevailing feudal society. The purda (veil) system keeps the women under veil and restricted to the four walls of the house. Women have a low profile in the society and discouraged for education, health and freedom of economy and decision making. The major communities of the district are Rajputs, Brahmins, Baniyas, Jats, Muslims and the scheduled castes Meghwal, Nayak, Sansi and scheduled tribes the Bhils. Untouchability is very much prevalent in the urban and rural areas alike.

Lack of Information and Education

Adding to the hindrances to development is low level of awareness and education. From the past decade, the district has made a progress in male literacy rates from 36.65 to 73.46 and in female literacy rates from 7.68 to 43.91 from 1991 census to 2001 census. However, the female continues to lag far behind the males. Though there are educational institutions, these are inaccessible to majority of the students due to lack of transportation facilities. Girl child education is discouraged in the village community. Even after the girls got admitted to the schools, as soon as they enter their adolescence, they drop out for social security reasons and to help the family with household chores or are married. These are the prominent reasons for low female literacy.

Socio-Economic and Health Status of Women

The socio-economic and health status of women is at is lowest, which is evident from the poor literacy rate and sex ratio of the district. Like other parts of rural Rajasthan, women are restricted to the court yard and purda (veil) system. They have limited opportunities of education, economic and decision making. The girls are married off at an early immature age and suffer the risks of early pregnancy. The village community is inaccessible to the health facilities. The primary health care systems lack facilities and infrastructure for health care deliveries. The deliveries in the villages are performed by untrained traditional birth attendants commonly known as dais. This poses risk for health of the mother and newborn. The health indicator shows that women status is at the lowest ebb. Various studies have established that infant and child mortality rates have direct association with the reproductive status of the mother. In the state the IMR is 81 as compared to the national average of 71, the MMR is 677 per lakhs live birth, which is highest in the country. The total fertility rate is 4.1, which is higher than the national average of 3.3.

Social Evils against the Women
Another hindrance in the way of development is the social evils prevalent against the women community. Evils like female infanticide, forced and child marriage, purdha (veil) system, dowry, atrocities against women in the form of sexual abuse, homicide, and molestation are frequent in the villages, especially towards poor and lower caste women. One of the major reasons for large drop out of girls from the schools is cited to be insecurity among girls on their way and at school. Scare of insecurity force the parents to early marriage of the girls. The social evils have come out of the male dominant patriarchal system.

Barmer District at a glance