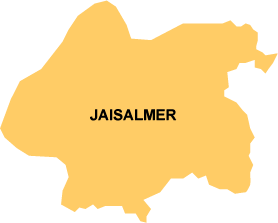 Jaisalmer is the largest district of the state Rajasthan. 10 percent of the area of the district is mountainous and the rest is arid desert with rugged terrain. In contrast to the geographical capacity the district has scanty population, which is unevenly distributed living in far flung hamlets. Certain parts of the district in the western region are designated as Desert National Park (DNP). It also shares part of its western boundary with Pakistan. Due to its geographical position the district faces severe droughts year by year. This makes the rural community face the problems like persistent scarcity of drinking water, rearing livestock during droughts, gathering and producing food in the dry years, family migration and unemployment problems. All these put together affects the life of the people at every stage and it contributes to the manifold increase in the suffering of the community. The rainy season lasts only for four months, from July to October, which gives the local community an opportunity to reap the khariff crop. Due to lack of irrigation facilities the local farmer has work only for four months and the produced grains are consumed in the next six to eight months. As the principal occupation of the region is agriculture, once the food stock empties, drought starts off.

Jaisalmer District at a Glance