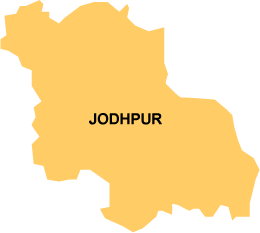 The district of Jodhpur is located in the western part of Rajasthan. It stretches between 26° and 27° 37" north latitude and 72° 55" and 73° 52" east longitude. This district is situated at the height between 250-300 meters above sea level. The district is bounded by Bikaner and Jaisalmer districts in the north, Pali and Barmer districts in the south, Pali and Nagaur districts on the east and Jaisalmer district in the west. Jodhpur, one of the largest districts of Rajasthan has a geographical area of 22,850 sq km. It has a population of 28.81 lakhs as per 2001 census.

The district resembles in shape an irregular rectangle studded with a few small hillocks. Large parts of the district fall under the category of Indian Thar Desert. It is an arid region where sand dunes are commonly visible. Luni River rises near Pushkar in Ajmer district and flows through Nagaur and Pali districts. It enters Jodhpur district near village Jhak in Bilara tehsil and ends in the form of an artificial lake known as Jaswant Sagar. Total length of the river in the district is 122 km.

Total area of irrigated land in the district is 130,370 hectares. There are about 11,037 tube wells in the district and the major portion of the irrigation is being carried out with the help of about 31,562 wells. There is a single river Luni that flows seasonally in the district.

The district comes under arid zone of the state and on account of non availability of adequate water, cropping pattern is, by and large, single only. Only 2.91percentage of the net cultivated area is being utilised for double/multiple cropping.

It covers 11.60 percentage of total area of arid zone in the state. General slope of the terrain is towards west. Despite its arid climate, Jodhpur is blessed with a variety of flora and fauna. A survey conducted by district administration with the help of forest officials shows 162 flora and 144 fauna varieties at Machia safari situated only 10 km from Jodhpur.

Extreme heat in summer and extreme cold in winter is the characteristic of the desert. The temperature in Jodhpur district varies from 49 degrees in summer to one degree in winter. The Sandstorm is spectacle for people from other regions of India. The rainy days are limited to maximum 15 in a year. The average rainfall is 302 mm.

Soil of the district is classified mainly as sandy and loamy. Bajra (pearl millet) is the major Khariffcrop. Jodhpur has excellent ground water taste in many parts of the district. Rabi crops such as wheat, pulses and variety of spices like jeera, dhania and red chilly are also grown. Jodhpur has a name for its red chilly, onion and garlic. It is one of the major production centres for Guar. Important crops in order of production in the district are wheat, millet, gram, rapeseed and mustard, kharif pulses, sesame and barley.

There is no perennial river in the district. However, the important rivers in the district are Luni and Mithri, but their basis is saline water. Main sources of irrigation besides rain water are dug wells and tube wells. The highest irrigated area in district is in Bilara tehsil followed by Bhopalgarh and Osian tehsil.