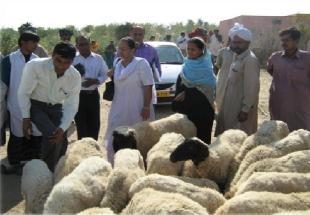 The main occupation in border districts of Barmer and Jaisalmer is agriculture and animal husbandry, but due to frequent droughts, the people have to face difficulties in their lives. Most of the people in these districts are dependent on sheep rearing for their livelihood.

But the sheep here are not of a fine breed, because of which the shepherds do not earn a satisfactory income. Due to frequent droughts and scarcity of fodder the sheep keep dying.

The famine code of the government does not give any recognition to sheep. Hence during droughts, fodder is distributed only for cows by the government and not for sheep. So sheep become victims of the feminine and perish.

Keeping these difficulties of shepherds in mind, the organisation is implementing a Sheep and Wool Development Programme in Jaiselmer and Barmer district.

Advocacy for Including Sheep/Goat in Famine Code

Sheep and goats are cows of the poor of the area. MMBA initiated advocacy for inclusion of sheep and goat into famine code. The issue was raised at the state level through the people's support and media. The government supplies fodder only for the cows during the time of drought. When the people of the area approached the district administration for the fodder, they simply denied saying that there was no provision to provide fodder to the sheep and goat. The people submitted the memorandum to the administration to include the sheep and goat into the famine code.